Teach Students the Design of Experiments


Science is a mixture of historically accumulated knowledge and skills. These practical skills range from problem solving to data analysis; they are wide reaching and can frequently be applied outside the classroom. The teaching of these skills is a very important part of science education, but is often overlooked when focused on teaching the content. As science educators, we have all seen the benefits practical work has for student engagement and understanding. However, with the time constraints placed on the curriculum, the time needed for students to develop these investigative skills can get squeezed out. Too often we give students a ‘recipe’ to follow, which doesn’t allow students to take ownership of their practical work. From a very young age, students start to think about the world around them. They ask questions then use observations and evidence to answer them. Students tend to have intelligent, interesting, and testable questions that they love to ask. As educators, we should be working towards encouraging these questions and in turn, nurturing this natural curiosity in the world around them.

Take a look at the printer-friendly pages and worksheet templates below!

This is a key part of the scientific method and the experimental design process. Students enjoy coming up with questions. Formulating questions is a deep and meaningful activity that can give students ownership over their work. A great way of getting students to think of visualize their questions is using a mind map storyboard. 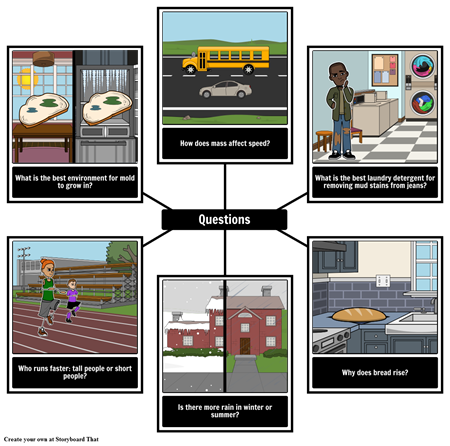 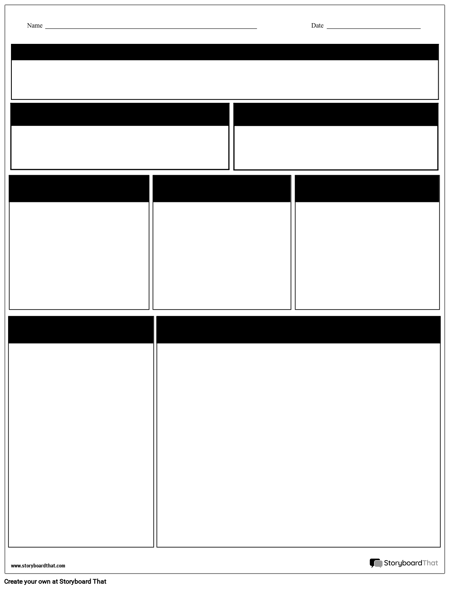 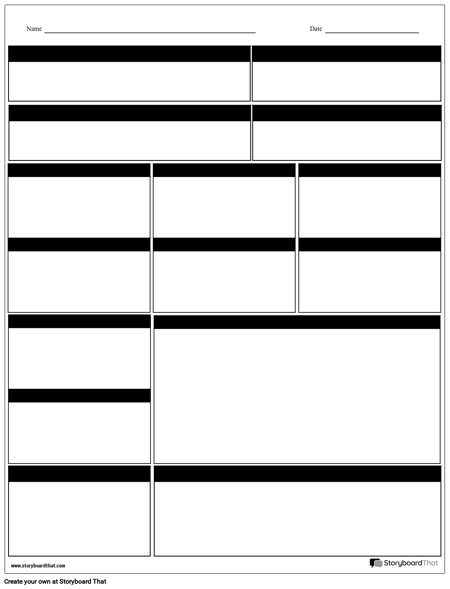 Ask students to think of any questions they want to answer about the universe or get them to think about questions they have about a particular topic. All questions are good questions, but some are easier to test than others.

A hypothesis is known as an educated guess. A hypothesis should be a statement that can be tested scientifically. At the end of the experiment, look back to see whether the conclusion supports the hypothesis or not. Forming good hypotheses can be challenging for students to grasp. It is important to remember that the hypothesis is not a question, it is a testable statement.

One way of forming a hypothesis is to form it as an “if... then...” statement. This certainly isn't the only or best way to form a hypothesis, but can be a very easy formula for students to use when first starting out. An “if... then...” statement requires students to identify the variables first, and that may change the order in which they complete the stages of the visual organizer.

What led you to this hypothesis? What is the scientific background behind your hypothesis? Depending on age and ability, students use their prior knowledge to explain why they have chosen their hypotheses, or alternatively, research using books or the internet. This could also be a good time to discuss with students what a reliable source is.

Below is an example of a Discussion Storyboard that can be used to get your students talking about variables in experimental design.

Dependent variables are what is measured or observed by the scientist. These measurements will often be repeated because repeated measurements makes your data more reliable.

Use this example below in your lessons, or delete the answers and set it as an activity for students to complete on Storyboard That.

Ultimately this must be signed off on by a responsible adult, but it is important to get students to think about how they will keep themselves safe. In this part, students should identify potential risks and then explain how they are going to minimize risk. An activity to help students develop these skills is to get them to identify and manage risks in different situations. Using the storyboard below, get students to complete the second column of the T-chart by saying, "What is risk?", then explaining how they could manage that risk. This storyboard could also be projected for a class discussion.

In this section, students will list the materials they need for the experiments, including any safety equipment that they have highlighted as needing in the risk assessment section. This is a great time to talk to students about choosing tools that are suitable for the job. You are going to use a different tool to measure the width of a hair than to measure the width of a football field!

It is important to talk to students about reproducibility. They should write a procedure that would allow their experimental method to be reproduced easily by another scientist. The easiest and most concise way for students to do this is by making a numbered list of instructions. A useful activity here could be getting students to explain how to make a cup of tea or a sandwich. Act out the process, pointing out any steps they’ve missed.

For English Language Learners and students who struggle with written English, students can describe the steps in their experiment visually using Storyboard That.

Not every experiment will need a diagram, but some plans will be greatly improved by including one. Have students focus on producing clear and easy-to-understand diagrams.

Students then follow their plan and carry out the experiment. It is important that students collect their results in a meaningful and easy-to-understand way. Data is often recorded in a table, but could also be done with photographs, drawings of observations, or a combination. It may be helpful to have students write down any difficulties and problems they had when carrying out the experiment. This could help later with evaluating their experimental method.

It is important to mention that any experiments students design should be thoroughly risk-assessed by the responsible adult before letting any students carry out their practical work.


After completing the procedure of the experiment, students analyze the data, draw conclusions, and then share their results. Depending on the student level, this might be a formal lab report, graphs, class discussion, or other method. 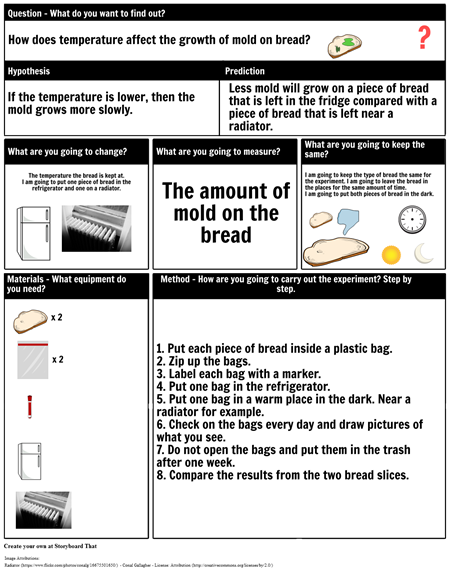 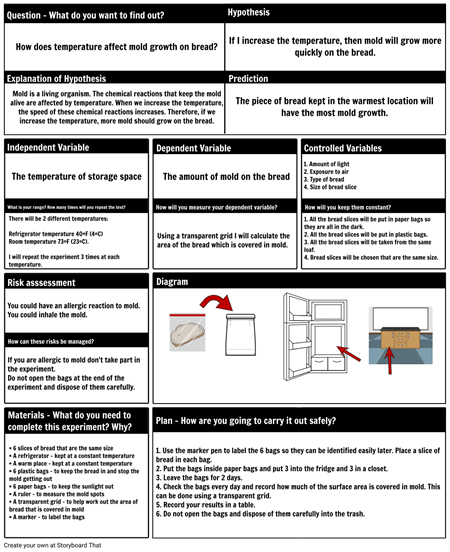 Using visual organizers is an effective way to get your students working as scientists in the classroom.

Very young learners can still start to think as scientists! They have loads of questions about the world around them and you can start to make a note of these in a mind map. Sometimes you can even start to ‘investigate’ these questions through play.

The foundation resource is intended for elementary students or students who need more support. It is designed to follow exactly the same process as the higher resources, but made slightly easier. The key difference between the two resources are the details that students are required to think about and the technical vocabulary used. For example, it is important that students identify variables when they are designing their investigations. In the higher version, students not only have to identify the variables, but make other comments, such as how they are going to measure the dependent variable. As well as the difference in scaffolding between the two levels of resources, you may want to further differentiate by how the learners are supported by teachers and assistants in the room.

Students could also be encouraged to make their experimental plan easier to understand by using graphics, and this could also be used to support ELLs.

Students need to be assessed on their science inquiry skills alongside the assessment of their knowledge. Not only will that let students focus on developing their skills, but will also allow them to use their assessment information in a way that will help them improve their science skills. Using Quick Rubric, you can create a quick and easy assessment framework and share it with students so they know how to succeed at every stage. As well as providing formative assessment which will drive learning, this can also be used to assess student work at the end of an investigation and set targets for when they next attempt to plan their own investigation. The rubrics have been written in a way to allow students to access them easily. This way they can be shared with students as they are working through the planning process so students know what a good experimental design looks like. 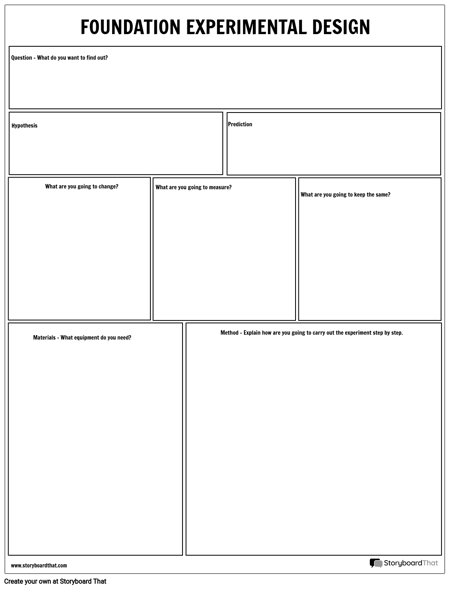 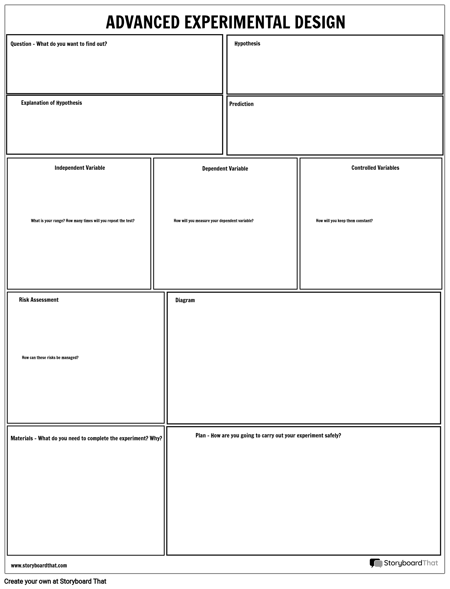 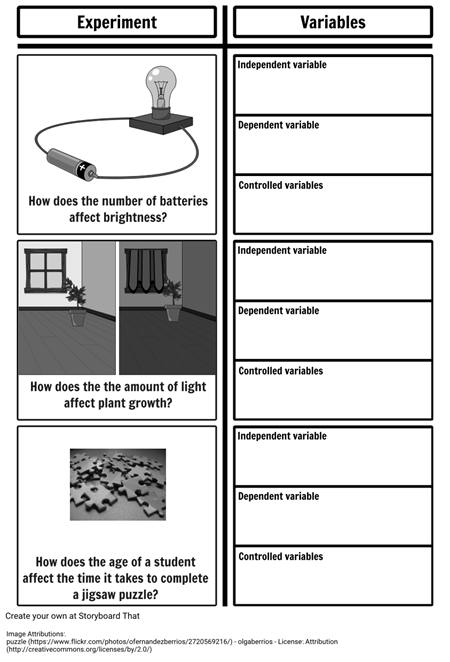 If you're looking to add additional projects or continue to customize worksheets, take a look at several template pages we've compiled for you below. Each worksheet can be copied and tailored to your projects or students! Students can also be encouraged to create their own if they want to try organizing information in an easy to understand way.