Physiognomy Definition:
The physical features and characteristics of a person that indicate personality, intentions, or other internal trait.

No doubt that many students will already have a basic understanding of physiognomy, especially if they’ve ever watched a Disney cartoon. Characters who are good are generally depicted as physically beautiful and flawless; characters who are evil tend to be ugly, disfigured, or have other grotesque features. For example, in Sleeping Beauty, Princess Aurora and Prince Philip are both beautiful and handsome, respectively; the three good fairies are also cute and surrounded by colorful light. However, evil fairy Maleficent has greenish-gray skin, yellow eyes, and black horns on her head. Children intuitively know that Maleficent is up to no good, and that the fair young Princess Aurora is in danger.

Authors use this same method in their character descriptions to give readers hints as to the deeper intentions and inner workings of the souls of their characters. This practice dates back to the Middle Ages, where it was believed that outer flaws, illnesses, and defects were the result of the devil, witchcraft, and sin. Shakespeare routinely utilized this practice in his plays, including depicting Richard III as such a disfigured hunchback, that it was only upon the discovery of his bones in 2012 that the King’s severe scoliosis was confirmed to be barely noticeable. Julius Caesar notes that Cassius has a “lean and hungry look”, which makes him and the audience rightfully suspicious of his motives as a conspirator to kill Caesar. Chaucer used physiognomy in the Canterbury Tales to subtly direct his readers to make decisions about certain pilgrims based upon their physical flaws or beauty.

Physiognomy plays an important role in literature by allowing the audience or reader to identify characters who have hidden intentions or motives. In classrooms, especially to connect with students’ previous knowledge in biology, students will readily understand that sometimes inner turmoil can lead to physical ailments. For example, they may already know about the various ailments linked to stress, including acne, stomachaches or headaches, and increased blood pressure. This can lead to interesting debates and and discussions about the connection between the spirit or emotions, and the body.


Physiognomy in The Scarlet Letter: Hester Prynne vs. Roger Chillingworth


Physiognomy in The Canterbury Tales: The Knight vs. The Summoner

However, sometimes physical flaws of characters do not always indicate a flawed inner soul. For example, Lancelot in The Once and Future King has a disfigured and ugly face. Even Lancelot himself thinks he is cursed by God, and he hopes to overcome this curse by dedicating himself to God and remaining as pure as possible. He believes his physical power and potential to perform miracles are connected to his chastity. While he stumbles in his quest to stay holy, ultimately, he finds that his relationship with God can be redeemed, and he remains a loyal knight and friend to King Arthur. On the contrary, Mordred, Arthur’s son with his half-sister Morgause, doesn’t technically break any laws but is determined to destroy Arthur. He is so pale that he is almost albino, and one shoulder is higher than the other - much like Richard III and Roger Chillingworth from The Scarlet Letter.

In The Kite Runner, Hassan is born with a harelip, but he is a loyal friend to Amir and pure of heart. He protects Amir from a local bully, and even forgives Amir when he frames Hassan for stealing. Both of these characters overcome or defy their physical flaws, which creates interesting discussion in the classroom for deciding how important physical looks are to a character’s intentions. It also prompts discussion on how we can determine who is good versus who is evil in real life. Students may want to discuss various historical figures and their physical qualities, and whether or not their legacies are good or evil. The truth is, sometimes not all evil characters are identifiable by their flaws; likewise, not all good characters are physically perfect. Physiognomy can be used in characterization activities, character analysis, and anticipation activities to help students better understand and question characters’ true intentions.

A great way to have students analyze the impact physiognomy has on characters and the story is to have them compare the good characters to the evil characters in a character chart, like the one below. This is also a good way to help students differentiate between indirect and direct characterization. Use the template below to help students track these important character traits, and have them find evidence from the text to support their assertions that a character is good or evil. 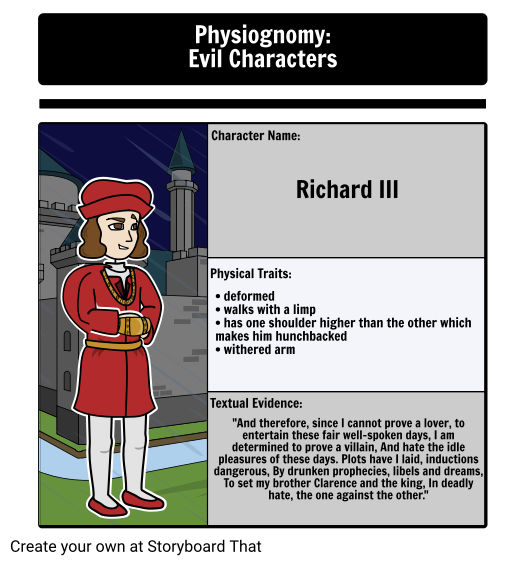