There are many different kinds of filmmakers and all of them have a story. With each story, comes a unique set of requirements and obstacles to plan for and plan around. Equipment, actors, story ideas, and logistics are all important for all filmmakers. We at Storyboard That want everyone to be able to tell their story, whether it be in a single panel of a storyboard or a feature-length film. We have many resources available that will help you get your story in motion.

How to be Your Own Storyboard Artist


Hiring a storyboard artist is time consuming, expensive, and can ultimately be ineffective. There are many advantages to being your own storyboard artist, but what if you don't know how? This article gives you three simple tips on how to easily create storyboards and make them look professional. 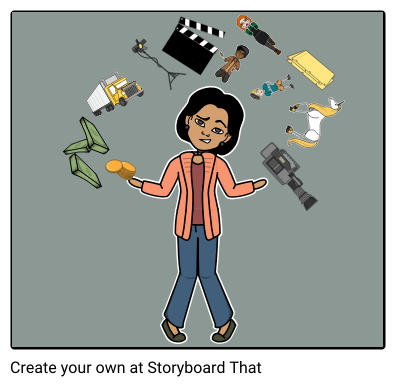 The Role of Film Producers


Producers are the men and women who take care of thousands of details to make sure the film can be made. Find out more about the working relationship in Making It All Happen: The Role of Film Producers.

How to Work with Cinematographers


As a filmmaker, you have a certain vision in your head. The cinematographer is the one who will make your vision come to life by choosing the right filters, cameras, lenses, angles and so on. Find out more about the working relationship in Working with the Cinematographer.

How to Transform Words to Storyboards


Before you start creating your storyboard, you have to decide which storyboard template you want to use. This is one of those “there’s no wrong answer” choices. It’s a matter of which workflow you feel most comfortable with.

How to Storyboard your Screenplay


Filmmaking begins from the first time you dream. That can be the sleeping kind of dream, or the daydream, where your imagination takes you to amazing places. In both cases, there’s a picture in the mind’s eye. And for the moment, nobody in the world but you can see it. In that way, we are all filmmakers. But what separates the bonafide filmmaker from everyone else is their need to turn those dreams into an actual movie. And that means getting down to the hard work of bringing those visions to life.

How to write a Screenplay


Need help on writing a screenplay? We've got you covered. From writer's block to editing the final product, The Screenplay: the Guide to Getting it Done is a helpful article to get you through a difficult process.


There are a lot of steps to making a movie of any kind, and so much depends on proper planning. With the right foresight, you can save the production both time and money. Read our Pre-Production Checklist article to make sure you are preparing for everything you need.

How to Storyboard for Film


The storyboard is the first time your big idea gets to be seen. Storyboarding is essential for making sure everyone is on the same page before and during production. Check out some of the reasons you should be Storyboarding for Film.

A Director Prepares: Unleashing the Nexus of Filmmaking


You are the director of a film. What does that mean? What does a director do? How do you do it? There are so many misconceptions about film directors, many of them perpetuated by they themselves, and such a heavy mythology attached to the position, that the romanticized version is almost always both overstated and underestimated.


When creating a storyboard for film, it is imperative that the images reflect the script. Motion is central to these images: the motions of the characters and objects within the scene, as well as the motion of the camera observing it. Instead of bogging down the description box with tedious details of every action, let the image communicate the motion of a scene. Arrows are a simple and recognizable way to show motion or progression.

Just per month per user!

Check out the rest of our Business Articles and Resources!