Tips and Tricks for Character Poses

Since so many stories and comics center around dynamic characters, it is essential to convey the right emotions and actions in our storyboards. The drag and drop feature makes it super easy to get characters into your storyboards, but what do you do next? I have made many a storyboard in my time. Let me share some of the tricks I have picked up!


Posing Characters in Storyboard That

The humanoid characters are used most often and they have a very wide range of capability. If you just want to get the main idea across in a few seconds, choose one of the quick poses at the bottom of the Character Poser box.

The story of Hamlet has a great deal of emotional charge, action, and of course, death. Hamlet's confusion and hesitation to act are very important to the plot of the play, so we need to see the emotions on his face and in his body language. Take a look at the plot diagram for Hamlet below. Notice the shock, concern, confusion, and various death positions. 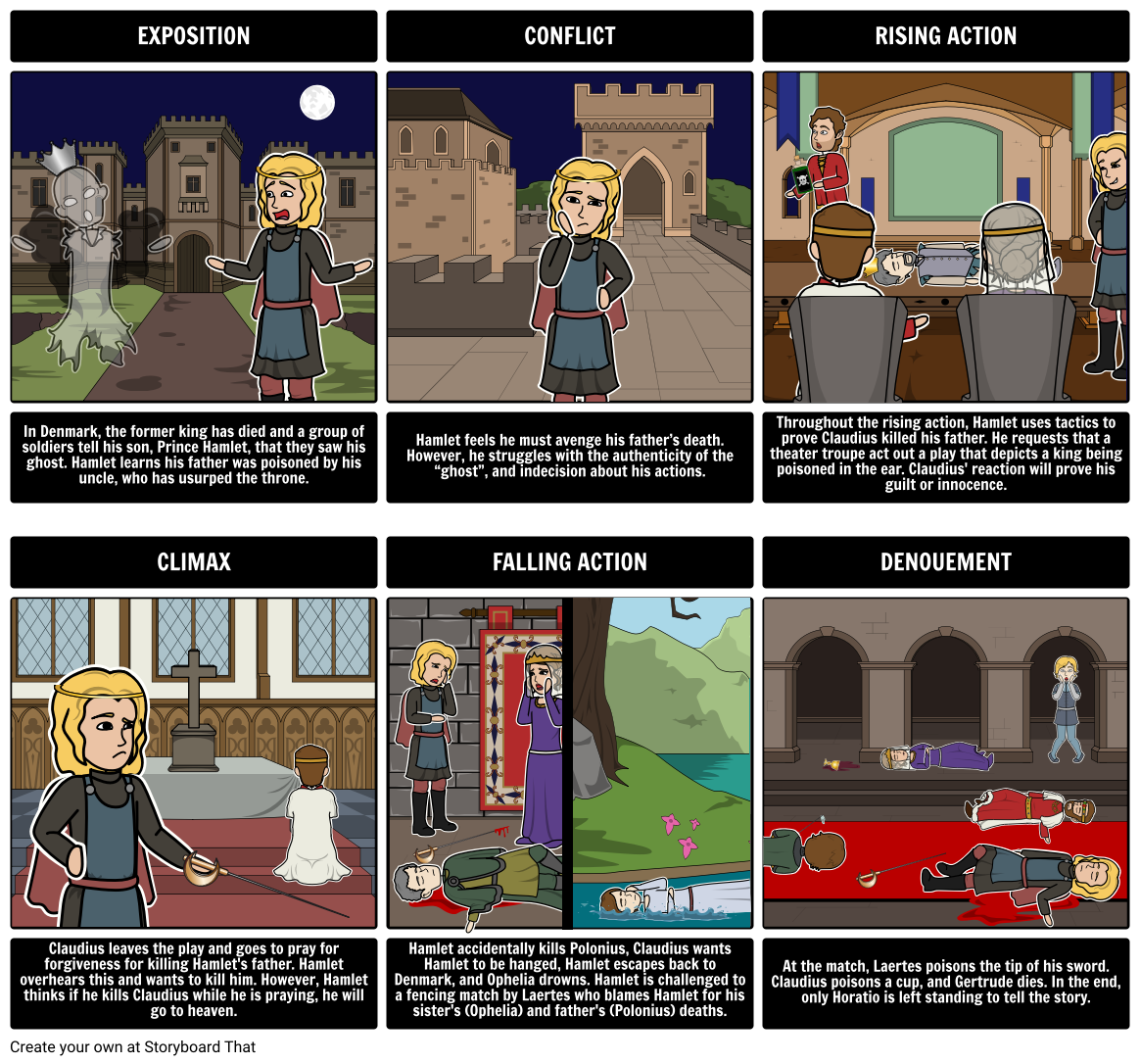 All of these positions can be created by choosing from a variety of options. When you click on "Edit Pose" in the editing palette, you have the option of changing the tilt of the head, expression, arm and leg positions, as well as which direction the character will face. The posing guide gives you a preview of what you are choosing. You can also easily customize your character after using the Insta-Pose as a start.

Of course, you can always pose the character completely on your own! Here are a few ideas on how to show various emotions within the Storyboard Creator! For even more tips, check out Character Posing by one of our artists.

NOTE BENE: Characters in the Sports category have special options for posing.

Ok. You have the idea. Now, on to the tricks! While you may not be able to get every pose exactly how you want, there are some things that you can do to make your storyboards amazing works of art and stories!

With the Storyboard That storyboard software, you have a great deal of power. The first sneaky tip I have for you is to play around with the position of your characters. The child in the "Jump" cell below is actually just kneeling in the air, but with the jump rope and the movement lines, it looks like she is jumping. The woman in the "Sleep" cell is standing with her head tilted down and eyes closed. Since she is horizontally placed on the bed, it looks like she is sleeping with her head on the pillow.

(Pro Tip: Search for "effect" in the Storyboard Creator for movement lines.)


I have found that emotions are messy and can be shown in many different ways. People's fear, happiness, anger, and more all manifest differently, particularly in a dynamic character like Ebeneezer Scrooge. In the example below, a family has just lost its house to a fire. You can imagine that they are experiencing many emotions all at once. Instead of each person in the family being in the same position with the same expression, they are each a little different while still conveying sadness and worry.


For my next trick: cropping! Cropping is one of the most powerful editing tools we have, and you can do so much! Crop characters to look like they are behind a table or looking in from a doorway. Take the head from the front view of the character and put it on the side view of the body. Crop the head of one character and put it on another! Crop the top half of a character onto legs in a different position to show leaning!


Layering is different from cropping. With layering, you can easily put separate characters or items on top of each other to show depth or to cover something. In the example above, I cropped myself by posing first, then copying and trimming to get each piece that I wanted. This way, I was able to show myself trying to sneak some of Stephanie's cookies from behind the table - the table that is part of the scene. Stephanie watches with irritation from the window, but her character is layered behind the room scene, so you can only see the part of her that shows through the hole in the scene (the window). The backyard scene is located behind Stephanie's character.