Over the years I have used storyboarding in my 7th grade social studies class as a way for students to demonstrate their learning. For example, in the Jamestown Settlement unit, students research facts and then compare their findings to the 1995 Disney film, Pocahontas. Their challenge is to storyboard a scene as historically accurate, and then “pitch it”—or sell their scene—to the class. This is all based on something known as the “Pixar Pitch”, which is how the famed digital cartoon studio storyboards. To learn more, consider showing this video to students.

In January 2017, my 6th grade social studies students used Storyboard That to create graphic novels set during the medieval European time period, also known as the Middle Ages. Unlike the Jamestown project—which relies on rewriting the existing narrative of Pocahontas—this assignment was more open-ended. Students first self-selected subtopics about life in Europe during the Middle Ages. Subtopics ranged from medieval architecture (i.e., cathedrals, castles), to the Black Death, and to the Crusades.

Although the medieval time period is inherently interesting (at least to me!), my trepidation was that students might author stories that were boring. I didn’t want them to storyboard out rote facts about armor, knights, and chivalry. So I decided to bring in an expert storyteller: Mark Cheverton.

Mark Cheverton is a New York Times Best Selling Minecraft fiction novelist. I met him at the Games in Education Symposium in upstate New York last summer. A retired teacher, he led a presentation about how he mentors and guides students to self-publish books. He explained how character arcs drive story narratives. Via Skype, he did the same for my students.

I emailed Cheverton in April 2017 for more. I told him how I wanted to share his advice on writing historical fiction with the Storyboard That community. Regarding how characters drive stories, he said:

I think fiction can be a great tool to teach about history, but many young writers fall into the trap of trying to recount events, or document how things are in a certain time period. This kind of writing can quickly bore a reader that wants to be taken on an adventure. And what readers really want, are engaging characters where they see a little of themselves in the protagonist. So, rather than writing a story about castle construction, write a story about a young architect who is trying to make a name for himself in the kingdom. Rather than writing about the black plague, write about one family’s challenge with struggling to stay alive amidst the horror of the plague. We all want to read a story that will pull us in, and make us feel as if we’re experiencing the adventure, and the only way to do that, as a writer, is to use characters that the reader will empathize with, and root for, and cheer when they finally overcome that last obstacle. Characters drive stories, and the history lesson can easily tag along for the ride, and likely be remembered with better retention.


Inspired, several of my students decided to use Minecraft to build their medieval worlds. Often, they played in multiplayer worlds, virtually riding horseback and jousting. Then they took screenshots, or still images, of their worlds. Next they saved the images on Google Drive. Finally, they imported it all into Storyboard That. Here is an example of how one of my students made a graphic novel about an architect—not architecture. The content followed the story. 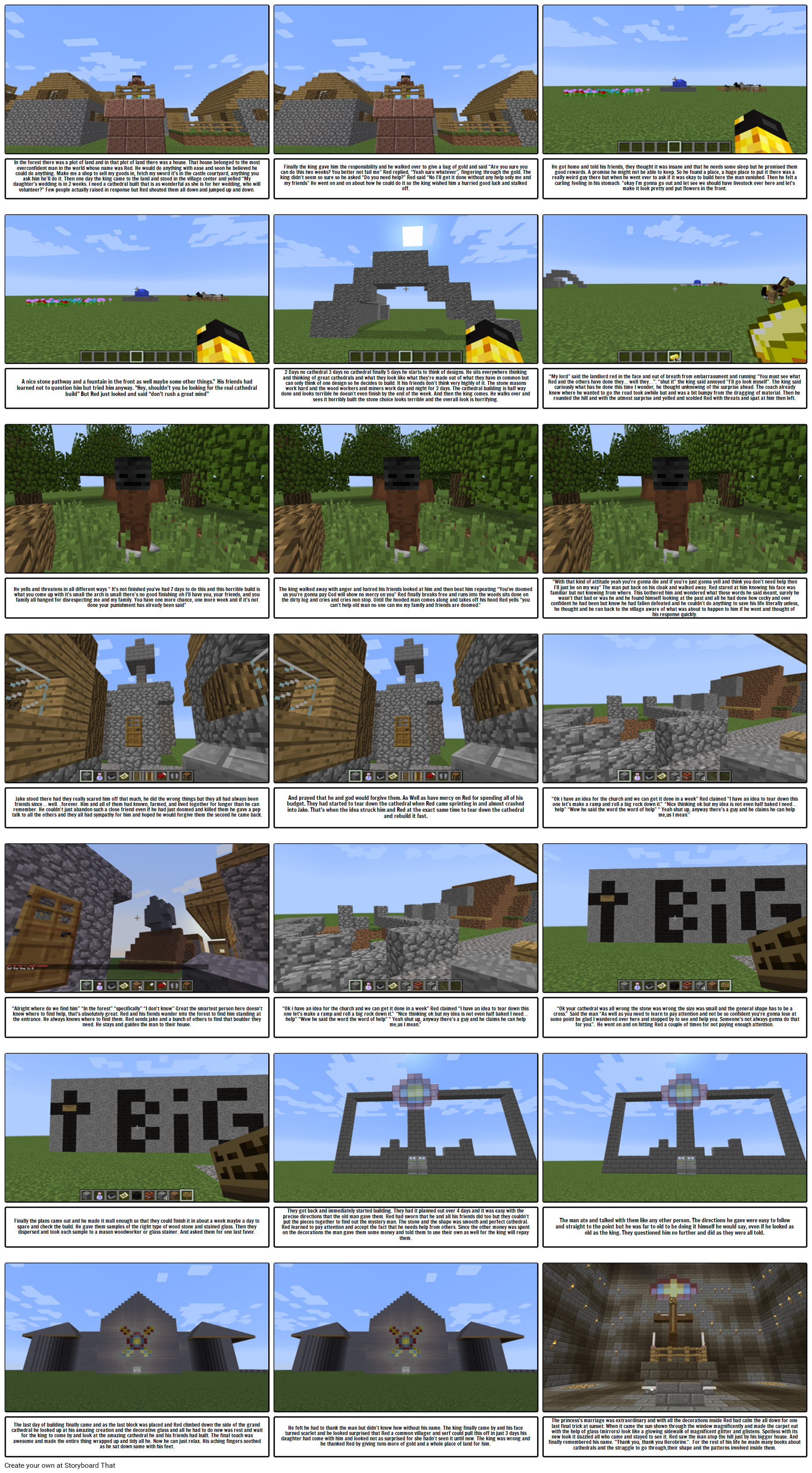 This project was really about student choice and voice. Student interests—in this case Minecraft—was brought into the classroom. The combination of Storyboard That and Minecraft was terrific. This can also be done on a mobile device, like a smartphone or tablet. Simply build a Minecraft world, screenshot it, and then embed those images on one of Storyboard That’s many templates. Captions and word balloons can further augment the stories, as well.

The possibilities of marrying student interests with Storyboard That are seemingly endless! Much of Cheverton’s advice became embedded into students’ work. He even shared one of their graphic novels on his blog!

Matthew Farber, Ed.D. teaches social studies at Valleyview Middle School, in Denville, New Jersey. Dr. Farber is an Edutopia blogger and cohost of Ed Got Game, on the BAM! Radio Network, and is a BrainPOP Certified Educator. He was a recipient of a Geraldine R. Dodge Teacher Fellowship and a Woodrow Wilson HistoryQuest Fellowship. Look for the new, expanded edition of his book, Gamify Your Classroom: A Field Guide to Game-Based Learning — Revised Edition (Peter Lang Publishing, 2017). To learn more, please visit matthewfarber.com.

Buy Gamify Your Classroom: A Field Guide to Game-Based Learning by Matthew Farber on Amazon