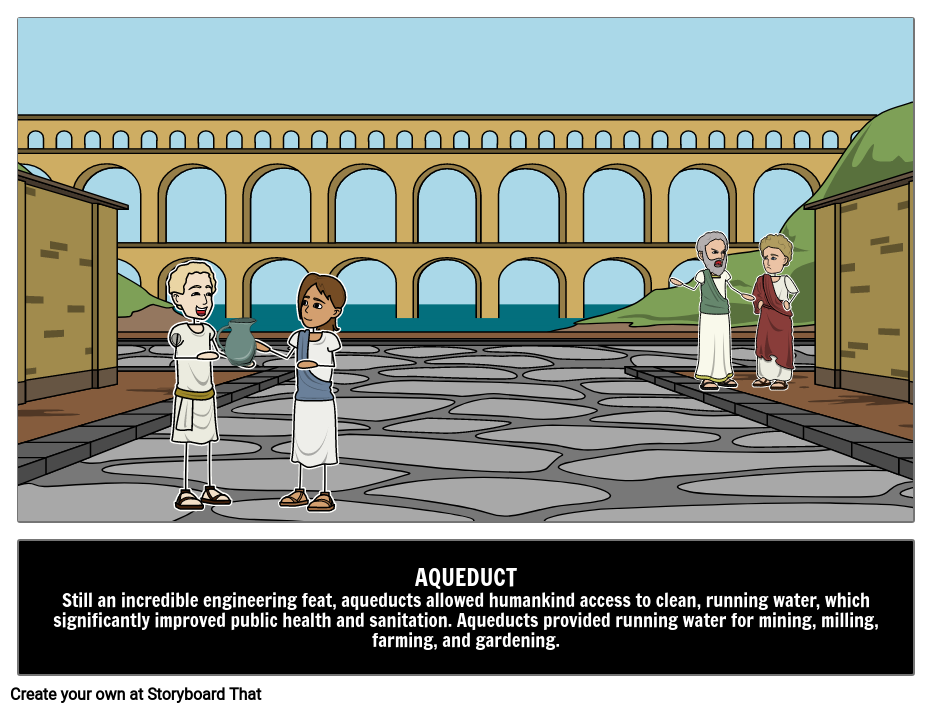 Aqueducts are man-made structures that carry water via gravity from one point to another. The word aqueduct comes from the Latin words aqua, meaning ‘water’, and ducere, meaning ‘to lead’—the word literally means “to lead water”. The Romans are famous for their aqueducts and are considered the great engineers of this technology. Similar systems called qanats were used by the Persians, Indians, and Egyptians hundreds of years prior. The Assyrians built an aqueduct resembling the structure of a Roman aqueduct in approximately 691 BCE. This aqueduct was used to bring fresh water to the city of Nineveh and was 10 meters high and 275 meters long across a valley. Still, the earliest use of aqueducts was by the Minoan civilization around the 2,000 BCE. These were made of inverted clay tiles, and sometimes pipes, that carried water across a short distance, following the contours of the land.

While other civilizations constructed aqueducts, the Romans built a system that served their Empire's capital and remains a significant engineering accomplishment. During the course of 500 years, a total of 11 aqueducts were constructed to bring water to Rome from distances as far away as 92 km. Some of these are still in use to this day. Not all the aqueducts crossed over valleys on stone arches. Many consisted of underground structures made of stone and terracotta pipe; wood, leather, lead, and bronze were also used. Gravity caused the water to flow through the pipes and through several distribution tanks within the city. These aqueducts also supplied Rome's fountains, baths, and even private villas. The Romans usually didn't store water, and the excess was used to flush out sewers, contributing to the city's sanitation. Inventing aqueducts that utilized the arch enabled the Romans to build larger systems, and with new materials such as concrete and water-proof cement, they could carry water along the straightest possible route.

Aqueducts were made even more efficient with the invention of the inverted siphon, as it allowed gravity to push water up through the pipes. The Romans had gadgets to manage pressure and regulate water flow, storage reservoirs, settling tanks, and mesh filters. Water could even be "freshened" by aerating it through a cascade system. While no agricultural activity was permitted near the aqueducts, they did benefit farms because run-off channels provided water for irrigation. The first century CE witnessed a great deal of aqueduct construction—likely related to the spread of the Roman empire. Knowledge of engineering increased, and the aqueduct projects grew in scale, as did the skill with which they were built.

Aqueducts can still be seen in Greece, Italy, France, Spain, North Africa, and Asia Minor. However, the systems fell into disrepair when the central Roman power deteriorated over the 4th and 5th centuries. During most of the Middle Ages, people in Western Europe reverted to getting water from wells and rivers. After some time, aqueduct systems started to be used again, particularly around monasteries, and by the 14th century, the city of Brugge had constructed a system. This system consisted of one cistern from which water was pumped by a wheel with buckets on a chain through underground conduits.

By the 18th century, steam pumps had been introduced, as had enhanced pressurization systems. These innovations resulted in further changes and enhancements, as better pipe material was needed. While modern aqueducts lack the visual appeal of the ancients, they are superior. Modern aqueducts are hundreds of miles long and provide a steady supply to large urban centers and irrigation projects. The state of California has the longest aqueduct system in the world, carrying water approximately 700 km (440 miles). Overall, aqueducts provide a steady supply of water to areas that have limited natural water sources. Additionally, aqueducts have contributed to sanitation, engineering advancements, public entertainment, and various other necessary activities, including mining, farming, and milling.

Examples of the Effects of Aqueducts


Create a Storyboard
See All Innovations