Lord of the Flies by William Golding

Lord of the Flies is an eye-opening novel about what happens to a group of boys who are abandoned and left to fend for themselves. Students always seem to relate to the plight of Ralph, as he struggles to maintain order in a place where anarchy runs wild. Students see first-hand how quickly the chaos escalates when there are no rules or boundaries to a society.

Student Activities for Lord of the Flies Include: 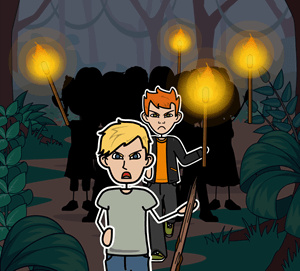 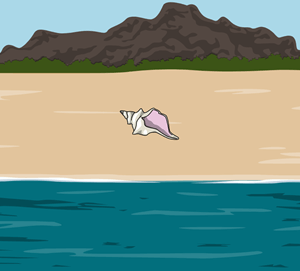 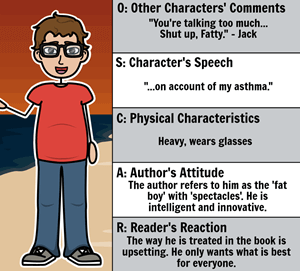 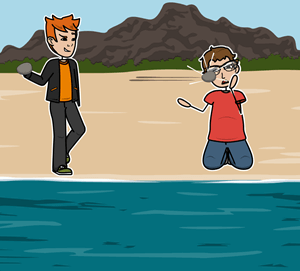 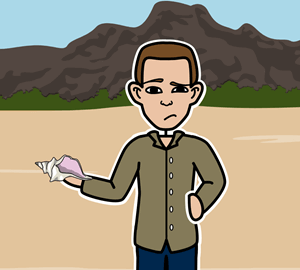 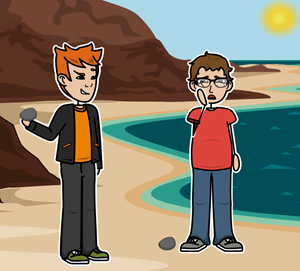 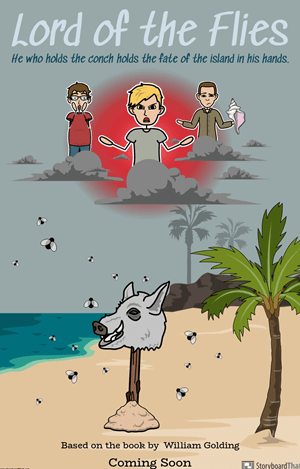 Lord of the Flies Summary

The story begins when a plane of students from a boys school is accidentally shot down over a deserted tropical island, during WWII. The story centers around two boys, Ralph and Jack; Ralph is quiet, level headed, and a poised leader; Jack is cruel and ruthless, making fun of others, and is eventually the center of many deaths.

With the boys stranded on the island, a struggle for power ensues. A boy named Piggy finds a conch shell; when he blows it like a horn, the boys who have scattered about the island run back to the beach. Ralph is made leader, and he uses the conch to decide diplomatically who will speak; whoever holds the conch speaks and no one else. However, Jack seems to be upset over Ralph’s position. Seeing this, they make Jack in charge of the hunting group.

Ralph's first declaration as leader is that they should light a fire to attract help. Through the use of Piggy's thick framed glasses, the boys ignite a fire. However, their inexperience and immaturity leads them all to ignore it. A raging fire starts and burns down part of the jungle. It is then assumed that one of the youngest boys had been burnt to death.

At first, life on the island is fantastic for the boys. They have no rules, and no one to discipline them. However, without a signal fire, the ship they see passing by leaves them stranded. Ralph, Piggy, and Jack argue about it. It was Jack's turn to watch the fire, but he let it burn out. During the argument, Jack ends up hitting Piggy across the face. Ralph blows the conch and gives a speech to restore order. However, the youngest boys are frightened and the older boys ignore Ralph. They have become savage hunters, relishing their first kill, a wild hog.

Rumors spread of an enormous beast on the island, and it becomes apparent that the boys' isolation is beginning to take a psychological toll. Jack and Ralph become increasingly hostile towards one another, and the boys decided to hold a meeting to discuss who is to be the leader of the group. Jack hopes that Ralph will be voted out, but the other boys refuse. Trying to rally the boys again, Piggy insists that they create a new signal fire. However, many of them are more interested in joining Jack in search of the "beast".

Shortly after, Simon, one of the older boys, has a dream where the head of the hog Jack killed, which has been staked in the forest, speaks to him. When Simon wakes, he realizes that there is no beast, and that the real monsters are within all of them. He goes to talk to the boys on the beach, but when he emerges, they think he is the beast and kill him. The next morning, Ralph, horrified over what happened, goes to Jack’s camp to talk to the hunters. They become unreasonable; Piggy is killed, and Ralph must run from the hunters who turn on him.

Buy Lord of the Flies by William Golding on Amazon

Ralph must hide and run for his life. Finally, Ralph runs to the beach only to fall at the feet of a British soldier. The fire, again raging out of control, signaled a naval ship. When the naval officer begins to question Ralph about what is going on, Ralph and all of the boys began to sob uncontrollably, knowing what they've done and now facing the reality of their actions.


Essential Questions for Lord of the Flies

Don’t Let the Fun Stop There! Check Out Our Other Lesson Plan Ideas