Number the Stars by Lois Lowry

Number the Stars by Lois Lowry is a realistic historical fiction that portrays a young Danish girl, Annemarie, during the Nazi occupation. Annemarie’s best friend Ellen and her family are Jewish and are being hunted by the Nazis. Annemarie’s entire family works tirelessly and at their own peril to save Ellen’s family, as well as many others unknown to them. Many, many Danish people secretly rebelled against the unwelcome invasion of their country. As a result, the Danish Resistance formed and members found ways to undermine the Nazis.

One way was to sneak out the Danish Jews and get them to Sweden, a country that Germany did not want to occupy and which remained neutral throughout the course of the war. Ellen’s parents and uncle, as well as her dead sister’s fiance, work relentlessly to move them safely out from under the all-seeing eyes of the soldiers, and their ever-sniffing dogs.

Student Activities for Number the Stars Include: 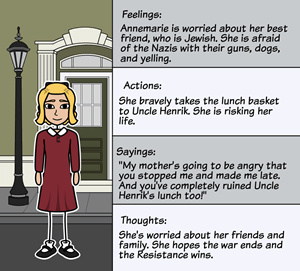 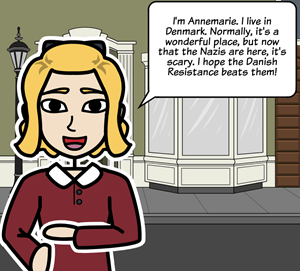 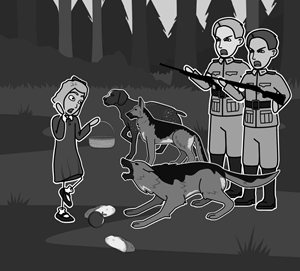 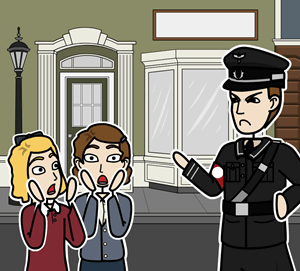 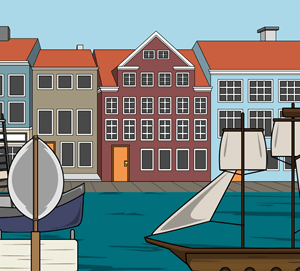 Annemarie Johansen lives in Denmark during World War II. Her best friend is Ellen Rosen. They are as close as sisters. Ellen is Jewish and the Nazis have just invaded Denmark. Supposedly, it is a non-aggressive infiltration. However, the Nazis are continuing the round-up of Jews, as they did in other countries. Annemarie and Ellen are scared of all of the soldiers that walk the streets with guns and dogs.

Annemarie’s sister, Lise, had been a part of the Danish Resistance Movement. Lise was killed during a demonstration, but the family still thinks of her often and it makes Annemarie sad to think of her. The fact that Lise had very dark hair made it easy to pass Ellen off as her when the Germans came to inspect the Johansen’s home.

One night, Annemarie remembers a story her Papa had told her about the king. One of the German soldiers had been in a crowd when the King of Denmark rode by on his horse. The soldier asked a boy where all his guardsmen and soldiers were. The boy said, “All of Denmark is his bodyguard.” And in a way, not only do the Danes watch out for the king, they all care and watch out for each other as well. That is why the Germans had such a hard time rounding up Jews in Denmark. Working together, Danes rescued over 7,200 Jews, out of the 8,000 who lived there during the occupation.

Annemarie’s family staged an elaborate fake death so many Jews could gather in Uncle Henrik’s home to prepare for their escape. They had a closed coffin in the living room and told a guard that the doctor had required it closed because “Great-Aunt Bertie” had died of typhus. The Jewish “mourners” sneak off to the boat in small groups throughout the night. Peter, Lise’s fiance and a fierce Resistance fighter, brings an important package to Mrs. Johansen. It must get to the boat before morning. Mrs. Johansen sets out to bring it to Henrik, but she breaks her ankle on a loose rock. When Annemarie realizes her mother is hurt, she brings her inside. Mrs. Johansen tells her to take the envelope and put it under a napkin and some food and bring it to her uncle. Mrs. Johansen says that if soldiers stop her, just say she is bringing lunch to her uncle, a fisherman. Annemarie does get stopped by guards. They go through her entire basket and laugh at the handkerchief that is in the hidden envelope. They let her on her way.

The handkerchief is paramount in the escape plan. Peter had worked with Resistance scientists to come up with a formula that would attract dogs with its scent but also would render the dogs incapable of smelling anything for a period of time afterwards. Henrik kept it at the front of the boat, so even though the Nazis went aboard and checked for stowaways with dogs trained to sniff out humans, once they smelled the chemical on the handkerchief, they were unable to detect any of the Jewish people who were packed like sardines under the boat’s floorboards. Henrik saw the Rosens to safety on the shores of Sweden.

The book ends with the war coming to an end. The Johansens have tended their Jewish neighbors houses, waiting for their safe return. Peter and other members of the Resistance had been killed by the Nazis prior to the war ending. The author, Lois Lowry, also ends with a little tidbit on how much of the story is real. Though the characters are fictional, they are based on the life of a good friend of Lowry’s who spent her childhood in Copenhagen, Denmark during the war. She also states that the handkerchief was a real thing. They were given to all the ship captains and they contained rabbit’s blood and cocaine to attract and disable the dogs.


Essential Questions for Number the Stars