In George Eliot’s British classic, Silas Marner, students follow the protagonist, Silas, through his life’s journey of despair and enlightenment. Forsaken and feeling the deepest despair of his life, Silas is forced to suppress his past when he finds a mysterious gift on his hearth. Silas, an old miser full of hate and mistrust, is given the most precious gift, a new life.

Student Activities for Silas Marner Include: 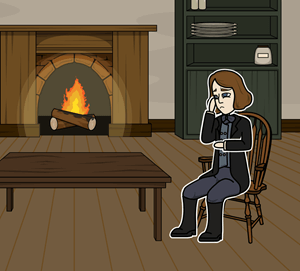 Silas Marner is a tale of love and overcoming setbacks. In the beginning of the novel, the protagonist, Silas, loses his friends, his faith, and his fiancé when he is framed for theft. Exiled, he moves from Lantern Yard to the idyllic English country side of Raveloe, a farming community. There, he replaces people and human interaction with money. He works at his trade, weaving, and isolates himself so that he can never be hurt like he was before.

Later in the story, plots converge when Silas has all his money stolen from him by Dunstan Cass, a conniving aristocrat from town. Dunstan, the Squire's son, had been in the business of blackmailing his older brother Godfrey. However, when money ran short, he offered to sell Godfrey’s horse, Wildfire. He ended up killing the horse before delivering it and receiving the money, leading him to steal from Silas.

On New Year’s Eve, leaving his door open, Silas gets an unlikely visitor. A small child, having left her dying mother's arms, toddles into his cottage. Silas, awaking from a trance, at first thinks the child is his gold returned to him. Seeing the tracks in the snow and then discovering the dead body, Silas goes to the Cass house to fetch the doctor. When he arrives, Godfrey recognizes the child as his from his secret marriage to a woman named Molly, a fact which Dunstan was using as blackmail. Godfrey, hoping the woman is dead, follows the doctor and Silas. His hopes are realized; Molly overdosed and died in the snow. Godfrey hated this marriage, and with his wife dead, he realizes he has the ability to marry his true love, Nancy Lammiter. However, there is still the issue of the child. Godfrey hopes it will remain a secret, and he is asured when Silas fights to keep her. Godfrey is relieved and secretly vows to always provide for Silas as a secret benefactor.

Many years pass and Eppie, the golden hair child, is now grown up. Silas and Eppie are inseparable. However, on the other side of Raveloe, Godfrey and Nancy Cass are unhappy and childless, an unspoken source of contention. One day, while Godfrey was draining the Stone Pits, a shocking discovery is made: the skeleton of Dunstan Cass is uncovered, and Silas’ missing money is next to him. This leads Godfrey to come clean about his past with his wife Nancy. Nancy becomes angry with Godfrey and suggests that they go and claim Eppie as their daughter so that he may have the child he has always wanted. This, again, could take everything Silas loves away from him! Eppie remains by Silas' side. She knows that Silas would never have forsaken her the way Godfrey did. In the end, Silas get his gold returned and gets to keep his daughter. Learning to trust and believe in others again, Silas and Eppie live happily ever after.


Check Out These Other Silas Marner Lesson Plan Ideas