The Adventures of Huckleberry Finn by Mark Twain

The Adventures of Huckleberry Finn is a novel filled with adventure and deception about a young boy, Huck Finn, and a runaway slave, Jim, who survive a series of obstacles.

Student Activities for The Adventures of Huckleberry Finn Include: 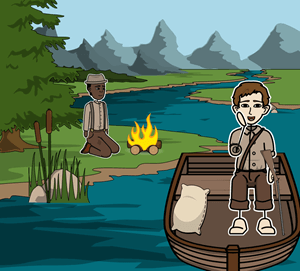 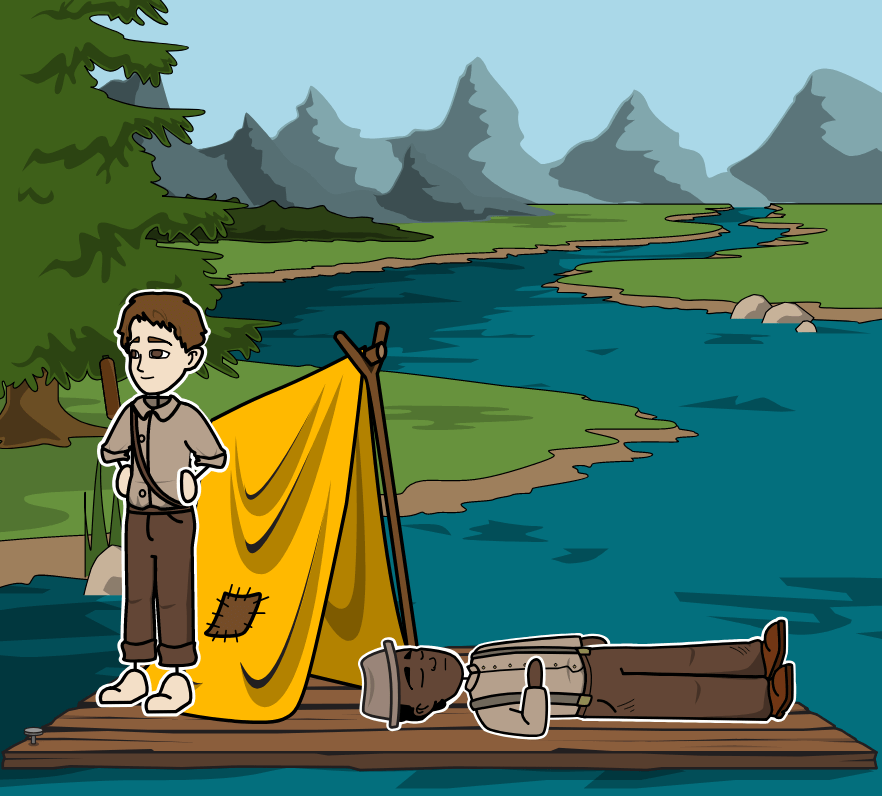 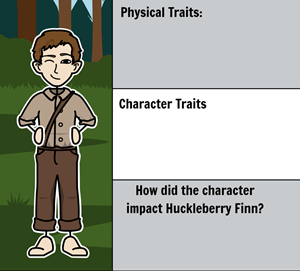 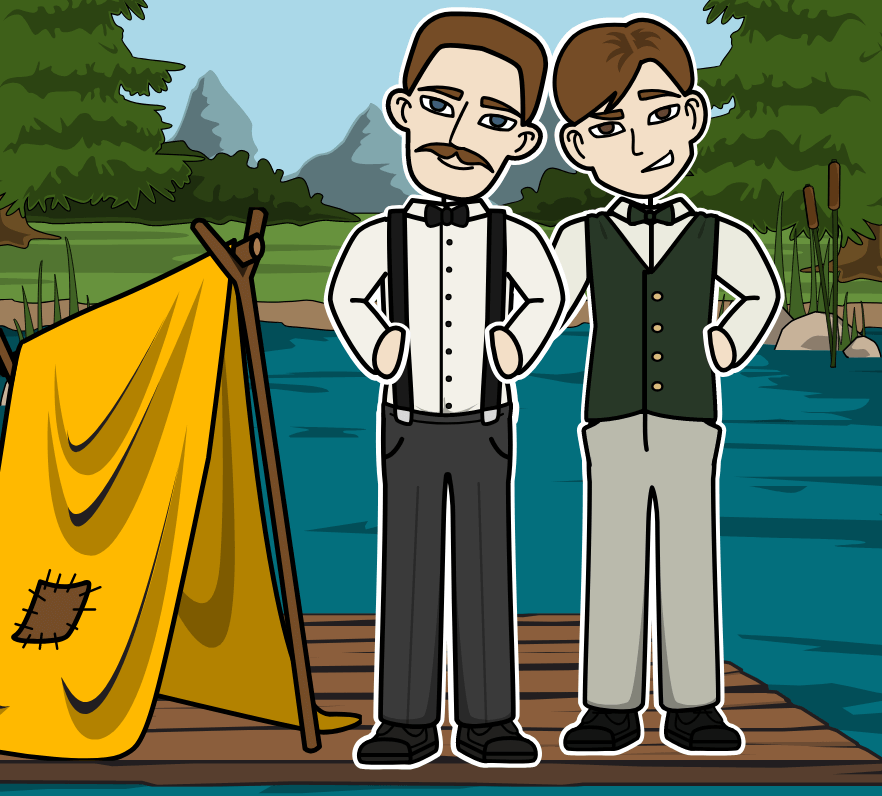 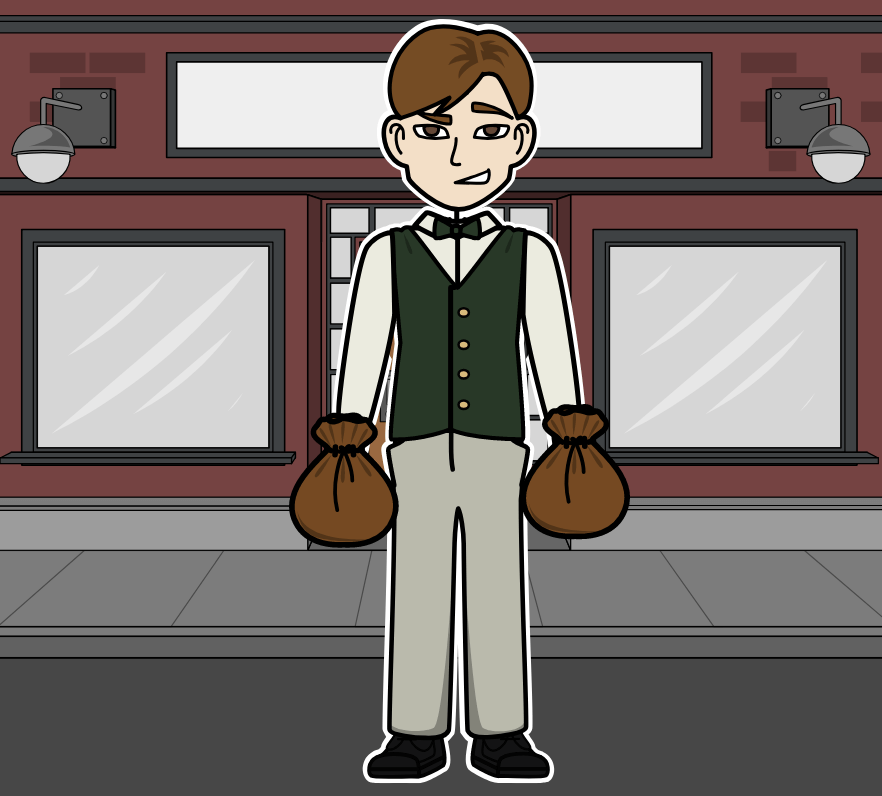 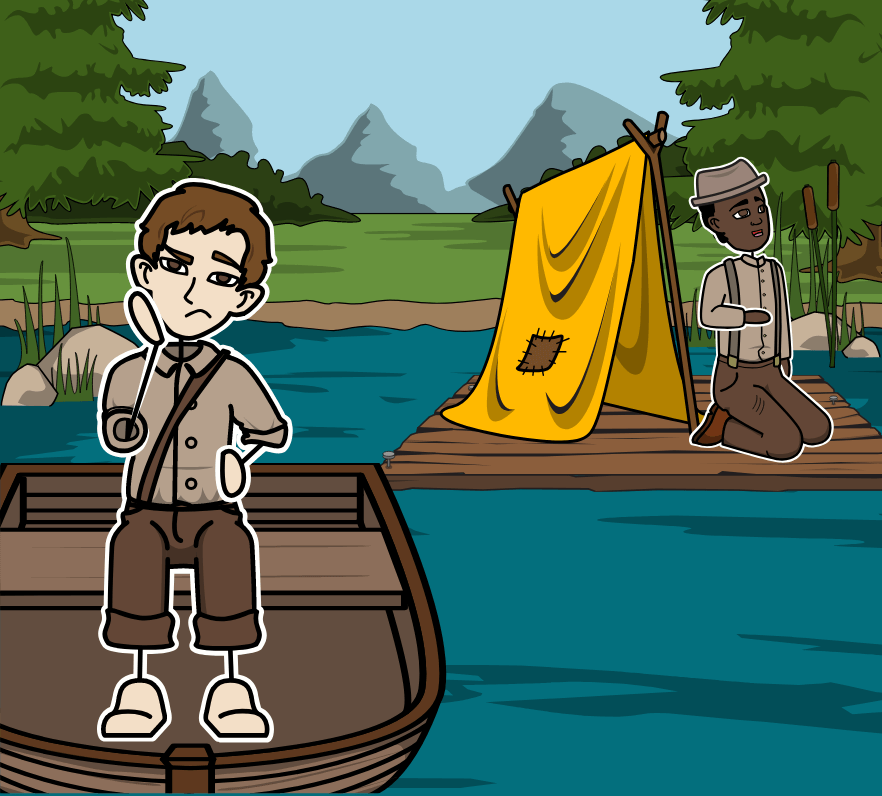 The Adventures of Huckleberry Finn Summary

The Adventures of Huckleberry Finn by Mark Twain begins with a reference to the book, The Adventures of Tom Sawyer. Huck explains how he earned his fortune; he and Tom found robbers had hidden in a cave. Judge Thatcher responsibly saved their money in an account and provided them an allowance of one dollar each day. Huck lives with Widow Douglas, a woman who has taken him in and is trying to civilize him. Huck is restless and lonesome. He desperately wants a change, so he sneaks out of the house with Tom Sawyer.

Huck sees tracks in the snow and believes that they belong to his father, an abusive drunk thought dead. Huck enters his bedroom to find that his suspicions are true - his father was waiting for him. “Pap” demands Huck’s money and warns him to stop going to school. Huck ignores him. Angered, Pap goes to court to get custody of Huck (and his money). A new judge, who is unaware of Pap’s history, rules to keep the family together, naively believing that Pap will change his ways. After getting custody, Pap takes Huck into the woods and locks him in a cabin.

One day, Pap has a hallucination and attempts to kill Huck, and Huck realizes he has to escape. The next time Pap leaves for town, Huck fakes his death and flees down the river in a canoe.

After floating down the river, Huck stops on an island and crosses paths with Jim, a slave he knows from home. Jim recently escaped after finding out that his owner, Miss Watson, was going to sell him. Jim also updates Huck on the search party out looking for Huck’s body. Huck dresses like a girl and heads into town to learn news of the two runaways. Huck talks to a woman who is new to the town, Judith Loftus. She quickly sees through his disguise, but doesn’t know his true identity. She tells Huck of the reward offered to find Jim and her suspicion that Jim is hiding on the island. After hearing this, Huck races back to Jim and they prepare to leave. Huck debates turning Jim in; however, Jim is so thankful for all that Huck has done, Huck can’t imagine turning in his friend.

One day, they help two fugitives escape on their raft. They claim to be the Duke of Bridgewater and the King of France. To pass the time on the raft and to plan their next act of deceit, the King and the Duke begin practicing for a performance of Romeo and Juliet, which they perform in town. For the third performance, the townspeople had arrived with rotten food to throw. The Duke and the King are prepared for this, and prior to going on stage, escape with a good sized fortune. Jim doesn’t like the King and the Duke because of their conniving ways.

The King and Duke impersonate two brothers of a recently deceased man to collect a sizable inheritance. They decide to stay until they can sell the slaves and the house. The doctor knows they are impostors, but nobody else believes him. Huck tells Mary Jane, one of the daughters, the truth and develops a plan to expose the frauds. The King and Duke are unsure about the money, but continue to sell everything else at an auction.

Just in time, a steamboat arrives with the real heirs. The lawyer and doctor put the King and Duke and the real brothers in a room to discover who are the frauds. The lawyer and doctor ask numerous questions, check handwriting, and inquire about a tattoo on the dead man. In order to determine who is telling the truth, they dig up the man’s grave. In the dark, through the thunder and lightning, they remove the cover of the coffin and are surprised to find the bag of money Huck had stashed there. With the chaos of this discovery, Huck escapes and runs to Jim on the raft. The King and Duke escape as well, and are just behind them in a canoe.

Jim is captured and sold. Huck gets word of Jim’s location and walks to the Phelps’s plantation. Huck poses as Tom Sawyer, and stops Tom on the road and quickly tells him what has happened. Tom thinks of a plan. Huck continues with his charade, while Tom pretends to be Sid, Tom’s brother.

Tom agrees to help Huck free Jim and comes up with a plan. After hiding a rope in a pie, attempting to grow a plant with tears, and creating a coat of arms, Tom and Huck are ready for the big escape. Tom writes warning letters and puts them in the front and back door of his Aunt and Uncle’s house. He then writes another letter stating that some cutthroats are going to come and steal Jim. He advises them to kill the thieves when they catch them.

After receiving the note, men crowd into the living room with guns, ready to kill whoever is going to steal Jim. Huck is scared, but he and Tom follow through with the plan and help Jim escape. The dogs start the chase and the men run after them shooting their guns. Huck, Tom, and Jim make it to the canoe and to the raft, almost unscathed; Tom had been shot in the calf.

Huck runs to get a doctor, but the doctor wouldn’t get on the canoe with Huck - he would only go alone. While waiting, Huck bumps into Uncle Silas Phelps. Huck makes up a tale about running after the slave. Aunt Sally is worried sick over Tom and stays up all night waiting for him. She makes Huck promise that he won’t sneak out of the house, but Huck is restless. He doesn’t want to hurt Aunt Sally, but he also wants to go find Tom.

The doctor brings Tom and Jim back home. Jim is locked up, but the doctor describes how kind Jim was and how helpful he was in helping care for Tom’s wound. Tom wakes up and confesses everything. He is very proud of himself and the great fun he had during the adventure. Polly, Tom’s mother, arrives and identifies the true Tom and Huck. Tom is disappointed that Jim didn’t escape, even though he knew all along that Jim was a free man. Aunt Polly confirms that Jim is free, and he feels like a rich man after being set up in the house. Huck finds out that his Pap has passed away and his $6,000 was still safe with Judge Thatcher. Aunt Polly agrees to adopt him and make him civilized.


Essential Questions for The Adventures of Huckleberry Finn

Buy The Adventures of Huckleberry Finn by Mark Twain on Amazon

Don't Let the Fun Stop There! Check out Other Lesson Plan Ideas