Digestion is the process by which the food we eat is broken down into nutrients that can be used by the body. Carbohydrates are broken down into sugars, which can be used in respiration. Proteins are broken into amino acids, which can be used for growth and repair in our bodies. The digestive system has a number of different, well adapted parts that work together to take food from bite-size to useful molecules that your body can use. The following activities aim to introduce students to this process with fun visual aids.

Student Activities for The Digestive System Include: 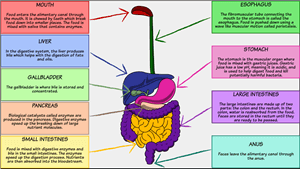 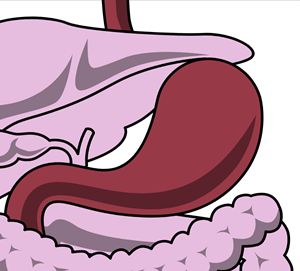 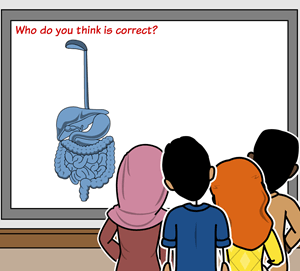 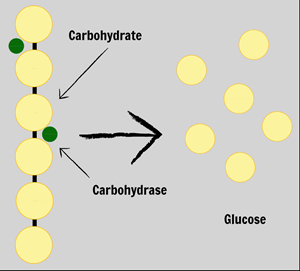 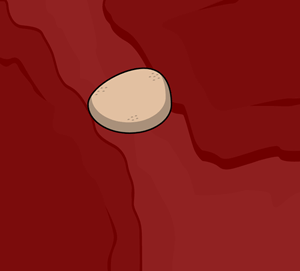 Parts of the Digestive System 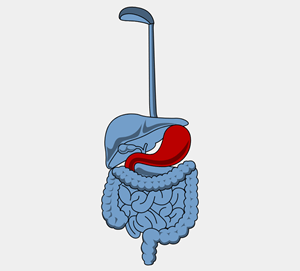 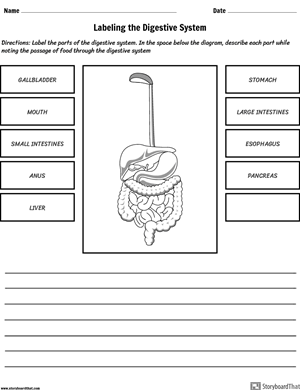 The digestive system has evolved to be very efficient in its processes, including extracting nutrients from food and drink. The alimentary canal is the passage that food takes from beginning to end. Food is broken down with the help of digestive enzymes in the body, and provides fuel and nutrients that we need to live.

Enzymes are biological catalysts that are used in the body to speed up biological processes, like digestion. Different digestive enzymes work to break down different nutrients, and pH and temperature affect how well enzymes work in the gut. Carbohydrates are broken down into more simple sugars using digestive enzymes such as carbohydrase and amylase. These simple sugars can then be used in respiration to give the body energy. Proteins are broken down into amino acids using digestive enzymes like protease. The amino acids can be used to make new proteins in the body. Fats and oils (also known as lipids) are broken down by enzymes, such as lipase, into glycerol and fatty acids.

Food enters the alimentary canal through the mouth, where food is chewed and mixed with saliva produced in the salivary glands. Humans have differently shaped teeth that do different jobs in mechanically digesting our food. The incisors are used for biting and tearing food. The canines are there to hold and cut food. Premolar and molars are using for crushing and chewing food. As food is chewed, it is broken down into smaller pieces. Saliva contains a digestive enzyme that further breaks down food. The food then forms a ball called a bolus.

The bolus moves through the esophagus (also known as the gullet) which is a fibromuscular tube connecting the mouth to the stomach and sits behind the trachea and heart. It moves food down from the mouth to the stomach through a process known as peristalsis. Peristalsis is the involuntary contraction and relaxation of muscles along the canal, an action that pushes the food through with wave-like movements. Peristalsis also helps food move through your intestines.

The food then passes from the esophagus through a muscular valve called the esophageal sphincter. The stomach is a muscular sack of tissue where the partially digested food is mixed with gastric juice. This is made up of stomach acid, which helps the food break down and also helps kills bacteria. As the food is broken down in the stomach, it produces a thick liquid called chyme. The chyme passes through the pyloric sphincter into the small intestine.

The small intestine is made up of three parts known as the duodenum, the jejunum, and the ileum. In the small intestine, food is mixed with digestive enzymes and bile. Bile is produced in the liver and stored in the gallbladder. Bile helps emulsify lipids (fats and oils). This breaks down the large fat droplets into smaller droplets that provide a larger surface area for the enzyme lipase to break the lipids down. Bile also neutralizes some of the stomach acid. This increase in pH will provide a better environment for the enzymes to function.The small intestine is also where digested nutrients are passed into the bloodstream. This absorption mainly happens in the ileum, which is the longest part of the small intestine. There are finger-like structures in the intestines called villi, which are there to increase the surface areas of the intestines to allow nutrients to pass into the bloodstream more efficiently.


Questions for the Digestive System