The Hunger Games by Suzanne Collins

The Hunger Games is the first volume in a trilogy of adventure novels. It follows a teenager, Katniss Everdeen, as she fights to survive in a dystopian, futuristic America. The country has been broken into twelve districts, heavily taxed by the wealthy and harsh Capitol.

Every year, the Capitol holds a deathmatch between child tributes, two from each district. Katniss, a strong-willed and capable teenager, volunteers to take her younger sister’s place. Katniss goes through the mind-numbingly violent game of murder with her male counterpart, Peeta. They manipulate the game by faking a romance, and out-maneuvering their opponents and Capitol politicians to become joint winners of the Hunger Games.

Student Activities for The Hunger Games Include: 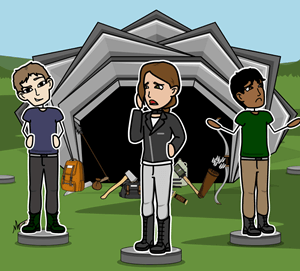 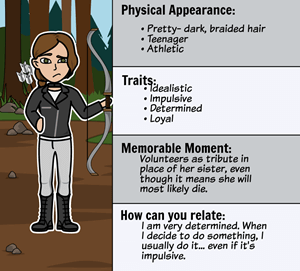 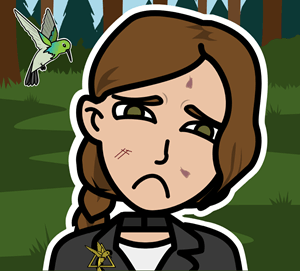 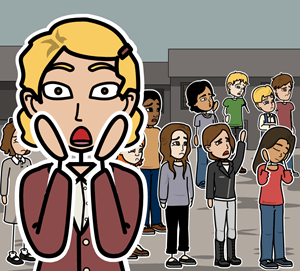 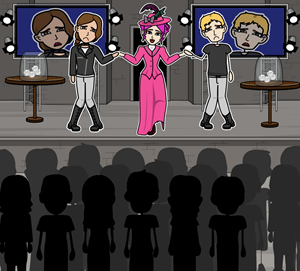 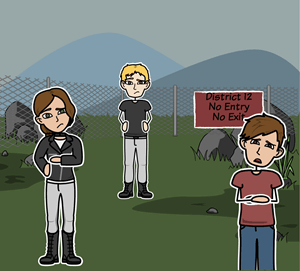 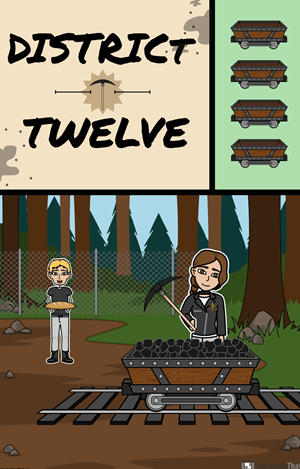 The book begins in Katniss’s home, District 12, where she lives with her mother and younger sister, Prim. Life is difficult in District 12, a mining community, and it became even harder for the Everdeens after Katniss’s father was killed in a mining accident. Katniss looks out for the family and supplements their income by illegally hunting wild game with a bow.

District 12 is part of a post-apocalyptic, dystopian society called Panam, in what was the United States. There used to be thirteen districts, but after a rebellion, District 13 was eliminated by the opulent Capitol, which rules Panam with harsh authoritarianism. After the rebellion of District 13, the “Hunger Games” were instituted: a gladiatorial competition among 24 adolescent “tributes”, a boy and a girl from each of the districts.

As the book opens, Gale, Katniss’ closest friend, hunts with her and suggests they run away together. Katniss rebukes the idea, pointing out they need to support their families. The two return to town in time for “the reaping”, the ceremony where tributes are selected by lottery.

When the female entry is called during the reaping, it is Prim. Katniss immediately volunteers to take her sister’s place. It is highly unlikely that she’ll ever come home. Some of the other districts are much stronger and wealthier, with well-trained tributes.

Her male counterpart is a boy with whom she’s gone to school, Peeta Mellark, the bakers’ son, a charismatic and kind person. Prior District 12 winner, Haymitch Abernathy, and Effie Trinket, their capitol-born chaperone, accompany them on the train ride to the Capitol. Hamish devises a strategy of portraying Katniss and Peeta as a couple to garner public support.

The Hunger Games are a highly technological endeavor. The Capitol funds the games, which are simulcast to all the people of the Capitol and also to those in the districts. It is the ultimate reality show, heavily engineered by the Capitol’s “game-makers”. The tributes are instant celebrities, treated to all the luxuries, fashion, and resources of the Capitol as they prepare for the Games. Peeta takes a central role in improving the pair’s public image, with Katniss reluctantly playing along.

When it is finally time for the kill-or-be-killed televised nightmare, Katniss bravely fights for her life, against both the game-makers and her fellow contestants, putting her practiced hunting skills to good use. She forms an unlikely bond with a very young tribute from District 11, a girl named Rue, who looked after Katniss while she was injured. The two work together to hobble some of the likely victors, but Rue is brutally killed in the process.

After Rue’s death, Katniss finds Peeta, wounded and only hidden by virtue of his excellent camouflaging skills. Having won over the viewers in the Capitol, the game-makers announce that two tributes, rather than one can win, so long as they are from the same district. Peeta and Katniss play up their “love story” for further support, securing an airdrop of medicine to heal both their wounds.

Katniss kills the last opposing tribute, only to have the game-makers reverse their decision to allow joint winners. Peeta insists Katniss kill him and return home. Katniss refuses and devises a plan to keep them both alive: they will both threaten to eat poisoned berries and leave the Capitol with no winners in the Hunger Games. With moments to spare, the Capitol concedes, declaring them joint winners of the 74th Hunger Games!

Katniss and Peeta learn that their stunt is considered an act of rebellion by President Snow, ruler of Panem. While the two continue to affect romantic feelings for each other, it becomes clear Peeta’s are genuine, while Katniss has been acting all along and her true feelings are confused. The two make a triumphant return to District 12, though dark clouds hang over their future.


Essential Questions for The Hunger Games

Buy The Hunger Games by Suzanne Collins on Amazon