Atalanta is a fierce woman who was raised by bears. She is known for her incredible speed, physical strength, and hunting abilities. 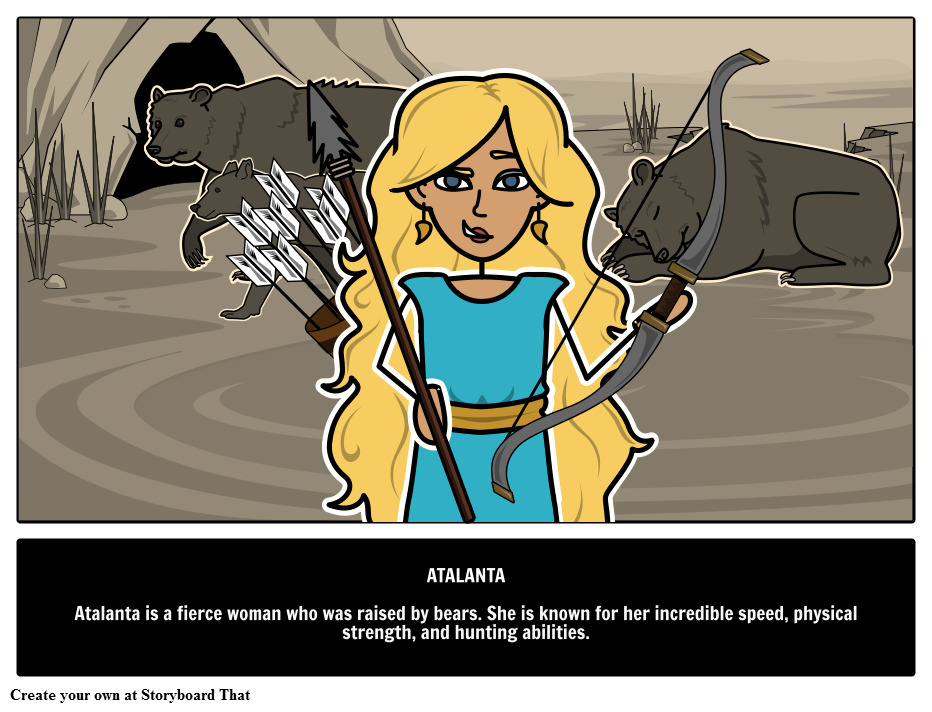 Atalanta was a princess born to King Iasus of Arcadia, who wanted a son. As soon as he saw that Atalanta was a girl, he ordered her to be left in the wilderness to die. A mother bear came along and heard her cries. Thinking she was a cub, she picked Atalanta up and brought her to her den, where Atalanta was raised among the bears into adulthood.

One day, a young prince named Meleager was out hunting when he was attacked by a bear. He stabbed it and wounded it, so he followed it until he came across Atalanta, who attacked him in a rage. The bear he had killed was one of her brothers. They wrestled until she realized that she had never seen another human being before and was more intrigued than enraged. Her prowess as a hunter and her physical abilities led Meleager to fall in love with her and bring her back to his kingdom to make her his wife. The two had many hunting excursions together, but the most dangerous was against a fearsome boar sent by Demeter who was jealous of Atalanta’s hunting skills. Because of Atalanta’s low status, Meleager’s family was against him marrying her or bringing her on the hunt, but he insisted. When they killed the boar, Meleager’s uncles’ jeering of their nephew for giving Atalanta the impenetrable skin of the boar led to Meleager cutting their heads off. Frightened and threatened by her son and Atalanta, Queen Althaea ran to her room and retrieved a burnt piece of wood, which she was told by one of the Fates many years ago would end her son’s life when it finished burning. Althaea threw the wood onto the fire, killing Meleager and devastating Atalanta who set out for Arcadia.

Upon her arrival in Arcadia, King Iasus learned her identity and was so impressed by her physical abilities that he accepted her as his daughter again. Suddenly, Atalanta was a princess again and a prize for the single men of the realm. She concocted a contest: she would marry whomever could beat her in a foot race. Hippomenes, who was madly in love with Atalanta, asked for help from Aphrodite, who gave him three golden apples to throw in Atalanta’s path during the race. Atalanta picked up all of the apples which became incredibly heavy and weighted her down, allowing Hippomenes to win the race.