Geb is the god of the earth, and the twin brother of Nut, goddess of the sky. He is often depicted with green skin, a goose or a snake on his head, and sheaves of barley to represent the fertility of the earth. 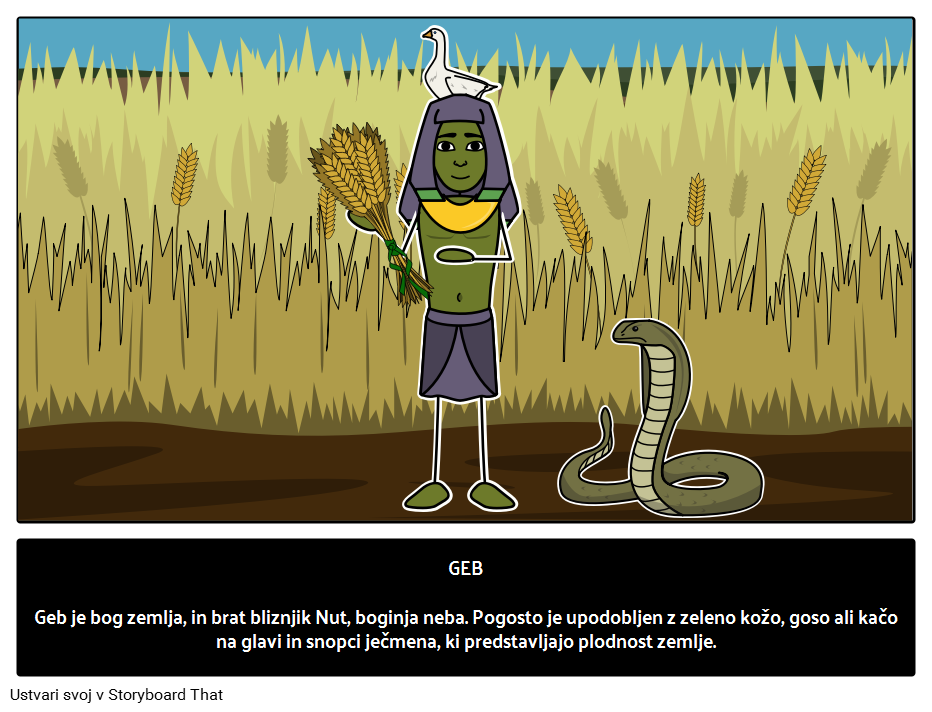 Geb was the son of Shu and Tefnut, and the twin brother and husband of Nut, the sky goddess. He was usually depicted with green skin or greenery on his skin to represent the fertile earth. He was usually drawn lying below his sister Nut as she was stretched out in a semi-circle above him. He was typically propped up on one elbow with one knee bent to symbolize the valleys and mountains of the earth. He was also usually depicted with a goose or a snake on his head. He was thought to be the father of snakes, and the goose both symbolized the sound of his name and the sound which he was thought to laugh, which caused earthquakes.

Some versions of his myth show an inseparable love between Geb and Nut, who was both his sister and his wife. Shu grew jealous of their bond and became the air that separates the sky from the earth. Geb was so devastated by their separation that the tears he cried became the oceans and rivers on the earth. In certain retellings of the myth, he and Nut had five children together: Osiris, Horus, Set, Isis, and Nephthys. He was often depicted on sarcophagi because he was thought to protect souls after death.

Geb was a great ruler who united the kingdoms of Egypt under one throne, which the pharaohs called the “Seat of Geb.” One story showed Geb being bitten by a snake which made him ill. Ra healed him, and in exchange, Geb split the kingdom of Egypt in two and gave one piece to Horus, and one to Set, which led to many years of war between the two brothers. He was often also depicted at Ma’at’s scales of justice, where he ushered unworthy souls to their doom in his tombs on earth.